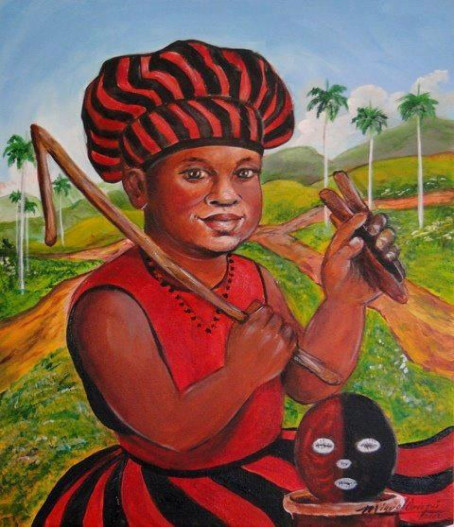 Who are the Orishas?

The deities, or gods, worshipped in the Cuban Yoruba Lucumí/Santería and Brazilian Candomblé and Umbanda religions are called Orishas (or Orixás in Brazil). They are all representatives of Olodumare, the Supreme Being, who placed the Orishas on Earth to help and supervise humankind. The Orishas are mediators between the human and spiritual realm, and are the major source of communication with the Supreme Being.

Originally in Yorubaland—the cultural region of the Yoruba people in West Africa that spans modern day Nigeria, Togo, and Benin--many Orishas were worshipped. Although a lot of Orishas survived the Trans-Atlantic Slave Trade, some were lost. Because of slavery, the Orishas that did survive had to be adapted in order to ensure survival. In Cuba and Brazil, through Catholic syncretism, many Orishas became associated with Catholic Saints. As a result, the Orishas were and are still referred to as “Santos” or “Saints” in both countries. Moreover, because of each country’s history, certain Orishas exist in Brazil that are no longer in practice in Cuba, for example Oxumaré.

Each Orisha is related to some aspect of nature and is in charge of some element of human existence. The Orishas represent all qualities of the divine but are also human-like in their characters. Each Orisha has its likes and dislikes, elekes (prayer beads), and specific numbers. The human-like attributes of Orishas play a very important role in the development and continuity of the religion. Since they have virtues and flaws like humans, practitioners are able to relate to their Orishas deeply, thus creating a bond between deity and devotee that is built on a personal relationship and identification with an Orisha.

The following is a very basic description of Eleggúa/Exú, Yemayá/Iemanjá, and Ochún/Oxúm, three notable Lucumí and Candomblé/Umbanda Orishas, their roles and characteristics. Check out our next post for more descriptions!

As the messenger, Eleggúa opens and closes every religious act. He is found at crossroads and corners, on the seashort and river, at the door to our homes. Eleggúa—also spelled Elegúa, Elewa, Elegba, or Legba--was the firit Orisha created by Olodumare and is the key in every religious practice. Elegguá is everywhere and ever present. He represents and lives between good and evil and observes everything that occurs in life, in order to report it to Olorún.

Known for having over 100 caminos, or roads/manifestations, Elegguá is usually depicted as a little boy. Some of his manifestations are: Eshu Laroye (the talkative one), Eshu Alawana (the one who roams alone in the wild), Eshu Aye (the one who lives at the edge of the river and the sea), and Eshu Olona (the owner of the world). He is mischief, mystery, the keyholder of fate. When one acts accordingly, he grants blessings; when one is unruly, he opens up the gates of misfortune, punishing those with loss, death, disease, and tragedy. When one receives their guerrerros (warriors), one of the first initiation processes into the Lucumí religion, the devotee receives the protection of Elegguá, Oggún, and Ochossi. In Brazil, he is referred to as Exú.

Number:  7 (and its multiples)

Yemayá, also spelled Iemanjá in Brazil, is one of the most powerful Orishas in Santeria and Candomblé. The ultimate universal mother, Yemayá/Iemanjá is the Orisha of motherhood and the queen of the sea and all its inhabitants. She is the mother of all living things and the owner of all waters. She gave birth to the stars, the moon, the sun, the world, and most of the Orishas themselves. Yemaya is all the waters of the world, and because of this she has many aspects, or caminos, each of which reflect the nature of different bodies of water.  The patron spirit of womn and pregnant women especially, she gives life in all ways. Yemayá’s domain is all waters, including the amniotic fluids babies are held in for 9 months inside of their mothers’ wombs. The patron Orisha of all women and mothers, Yemayá nurtures and tends to all. She is called upon by pregnant women for safety. Yemayá has many caminos, or manifestations, including: Yemayá Asesú (“the forgetful,” this Yemayá is the messenger of Olokún), Yemayá Awoyó (the oldest and richest road of Yemayá that lives in the ocean far from the shore and represents the expansion and wealth of the sea), and Yemayá Ibu Konla (“The one that builds the boat,” this is the Yemayá that lives in the seafoam entangled in seaweed).

Number: 5 (and its multiples)

The patron saint of Cuba, Ochún is the goddess of love and happiness. Ochún, also known are Iyalorde and Oxúm in Brasil, is Yemayá’s sister. Found in the sweet waters, such as rivers, waterfalls, and lakes, Ochún loves the finer things in life and is known for her sensuality. Representing emotional intensity, Ochún is the guardian of human sensuality, delicacy, love, and femininity. The youngest of the Orishas, when Olodumare finished creating the Earth, He sat back and realized he was missing sweetness and love. So, he created Ochún. The Orisha of love, her seductive and sensual power is found in all women. Living in the river and sweet waters, she exhibits all the characteristics of fresh water: she is lively, sparkling, and refreshing. She loves the fine things in life and in many ways, although she is the youngest Orisha, Ochún truymps by using her feminitiy and sweetness to conquer her enemies. Although she is seens as a happy and care-free Orisha, she has suffered many misfortunes and is sometimes very deeply melancholy and sad. Some of her manifestations are: Ochún Ibú Kolé (“The One that Collects and Recovers Garbage and Dust”), Ochún Ibú Akuaro (a young, hardworking Ochún who is said to be deaf, so she has to be called by a bell), and Ochún Ibú Añá (the “Owner of the Drums,” who lives on top of the drum and is also deaf).

>Who are the Orishas?

>HOW TO PREVENT KNEE INJURIES

>IS AFRICAN DANCE FOR ME?

>How To Overcome My Shyness In Dance Class